Happy Fri-yay! Instead of my typical Friday review I have something even cooler today. One of my favorite reads of 2019 was Dark Shores by Danielle L. Jensen (and Bridge Kingdom which was also amazing but I don’t have a review up for it yet) and I have to cover reveal for Dark Skies which is also a part of the same series! Instead of Dark Skies being book #2 in the series it can actually be read first. So what that means is for those of you new to the series you can start with either Dark Shores or Dark Skies. Dark Skies follows Lydia and Killian while Dark Shores followed Teriana and Marcus. It’s a pretty cool concept and while I’ll miss the sass and swoon-worthy love of Teriana and Marcus I’m really excited to meet Lydia and Killian and hopefully ship them as well.

But without further ado here is the amazing cover for Dark Skies!

Unwanted betrothals, assassination attempts, and a battle for the crown converge in Dark Skies, a new series starter set in the universe of the YA fantasy Sarah J. Maas called “everything I look for in a fantasy novel”

A RUNAWAY WITH A HIDDEN PAST
Lydia is a scholar, but books are her downfall when she meddles in the plots of the most powerful man in the Celendor Empire. Her life in danger, she flees west to the far side of the Endless Seas and finds herself entangled in a foreign war where her burgeoning powers are sought by both sides.

A COMMANDER IN DISGRACE
Killian is Marked by the God of War, but his gifts fail him when the realm under the dominion of the Corrupter invades Mudamora. Disgraced, he swears his sword to the kingdom’s only hope: the crown princess. But the choice sees him caught up in a web of political intrigue that will put his oath – and his heart – to the test.

A KINGDOM UNDER SIEGE
With Mudamora falling beneath the armies of the Corrupter, Lydia and Killian strike a bargain to save those they love most—but it is a bargain with unintended and disastrous consequences. Truths are revealed, birthrights claimed, and loyalties questioned—all while a menace deadlier and more far-reaching than they realize sweeps across the world.

Sounds pretty good right? I love the cover for this book and it fits beautifully with the Dark Shores cover as well. May 5, 2020 feels so far away so fingers crossed I can snag an eARC of this one! 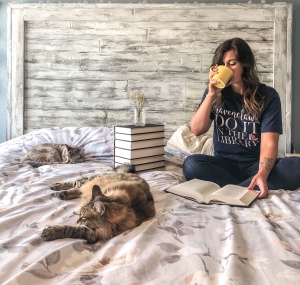